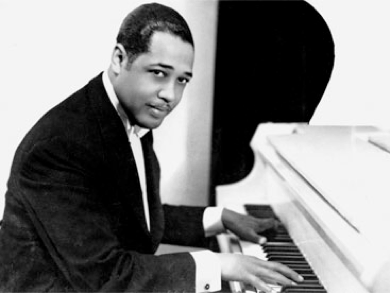 After studying piano as a child, Ellington became interested in local ragtimers such as Lester Dishman, for whom he deputized at fifteen. Working as a freelance sign-painter from 1917, he began assembling groups to play for dances, and in 1919 met drummer Sonny Greer from New Jersey who encouraged Duke’s ambition to become a professional musician. They played together (with early home-town associates Otto Hardwicke and Arthur Whetsol) in Wisconsin and Atlantic City before settling in New York in 1923, working first as a sextet under Elmer Snowden (also from Washington), then as the embryonic Duke Ellington and his Washingtonians (1924). Successful nightclub residencies culminated in a long stay at the Cotton Club with an enlarged, ten-piece band (from the end of 1927), with regular broadcasts establishing his reputation nationally. There were lengthy absences from New York in order to tour the West Coast and make his first film appearance (in 1930, when he was replaced at the Cotton Club by Cab Calloway) and for tours of Europe and Southern USA (both in 1933, when the replacement was Jimmie Lunceford).

During the second half of the 1930s, band numbers had increased to fifteen with two basses, and US tours playing at theatres, hotels and dances (virtually constant from 1934) were only broken by further work at the Cotton Club (1937, 1938 – the latter season there was the first to which Duke contributed songs as well as backing music for dancers) and by a second tour of Europe in 1939, Ellington played for and wrote the score of the revue Jump for Joy (1941) and a musical comedy, Beggars’ Holiday (1947).

A series of annual concerts at Carnegie Hall (from early 1943 to late 1948) and one at Metropolitan Opera House (19510 was another breakthrough, and each occasion saw the premiere of an extended composition. The temporary inactivity of the big band (1948) enabled Ellington to tour the UK with Ray Nance, singer Kay Davis and a local trio; the reconvened band was his largest ever (eighteen pieces, dropping to sixteen by the next European tour in 1950, and usually fifteen thereafter) but marked by the departure of Sonny Greer (1951) and the simultaneous temporary withdrawal of long term members Johnny Hodges and Lawrence Brown, all of them playing in Hodges’s own group. The declining popularity of Duke’s band in the USA was arrested by a newsworthy Newport festival appearance (1956), He became the first black composer commissioned to write major film soundtracks (notably Anatomy Of A Murder, 1959) and TV series theme music. (Benny Carter had preceded him but as an uncredited ‘ghostwriter’.) Further foreign tours multiplied; Europe (1958, 1962 -71 annually and 1973); Middle East and India (1963); Japan (1964, 1970); West Africa (1966); South America (1968); Australia (1970); Soviet Union (1971).

Ellington continued to produce quantities of new pieces and suites, including “sacred concerts” in various cathedrals, and to appear in public until a couple of months before his death from cancer. In 1999 the annual Pulitzer Prize for music – which he was recommended for but which was denied him back in 1965 – was awarded to him posthumously.

First recorded soon after the start of his band leading career, Duke seems to have been initially inspired by the successful white dance bands of the 1920s and their rather maudlin (and middle-class) view of what jazz was all about. However, the arrival of Sidney Bechet (briefly in 1925), Joe Nanton (1926 – 46) and especially the continued presence of Bubber Miley from the Elmer Snowden days (1924 – 29) introduced him, virtually for the first time in his life to the passion and poetry of black jazz. Early masterpieces such as “Black And Tan Fantasy” (co-written with Miley) are compounds of both approaches, and ever afterwards Ellington performed not one but several stylistic balancing acts. Additional soloists in the next few years – Harry Carney (1927 – 74), Barney Bigard (1927 -42), Johnny Hodges (1928 – 51, 1955 -70), Cootie Williams (1929 -40, 1962 -74), Lawrence Brown (1932-51, 1960 -70) and Rex Stewart (1934 -45) – were all sophisticated technically but, all being influenced byLouis Armstrong, were also in touch with the earthy roots of his music. Ellington responded with (or, rather, used their talents to help him come up with) such widely differing successes as “Mood Indigo”, “It Don’t Mean A Thing”, “Sophisticated Lady” and countless instrumental-only conceptions.

A significant new wave of contributors who signed up within a few months of one another included Ben Webster (1940 – 43, 1948 – 49), Jimmy Blanton (1939-41) and Duke’s writing collaborator Billy Strayhorn (1939-67). They brought him up to date with the jazz of the late 1930s and, particularly in the case of Blanton and Strayhorn, foreshadowed many of the rhythmic and harmonic developments of the 1940s. Ellington’s compositional penchant for cannibalizing what they had to offer and in turn stretching their abilities – in virtuoso vehicles such as “Cotton Tail”, “In a Mellowtone” and “Perdido” (a tune by Juan Tizol arranged by Duke) – surfaced again a decade later with the induction of established “modernists” such as Clark Terry (1951-9) and Paul Gonsalves (1950-74). Fewer Ellington “standards” may have emerged thereafter (and those that did were less innovative, eg “Satin Doll”), but items from Such Sweet Thunder and Suite Thursday were dramatic demonstrations of his facility for keeping up with the times and yet sounding always like himself. As late as 1966-7, the Far East Suite and “La Plus Belle Africaine” showed him convincingly coming to terms with modal jazz, and also with the increasing popularity of the Latin-jazz crossover which he and Tizol had started off with “Caravan” back in 1936.

Combining all those innovations within the ongoing history of one band is only half the story, despite the fact that no other figure managed to be creatively involved in so many different stages of jazz development. If it was merely a mater of anthologizing typical phrases of various jazz styles, then numerous other arrangers have achieved this – indeed, that is what arrangers are for.

But Ellington set his sights much higher, absorbing the utterances of his hired soloists into his own compositional expression so that the two frequently became indistinguishable. And this was possible because his sensitivity to notes (therefore, to harmony and rhythm) was matched by his sensitivity to textures. In this way, saying that Duke “always sounded like himself” is tantamount to saying that he sounded like Harry Carney and Johnny Hodges and Cootie Williams. But it is at least arguable that they would have sounded less like themselves, had it not been for Duke continually showing them in the best light and thus encouraging them to play at their best.

This is an area in which very few writers have ever tried to emulate Ellington; other aspects of his work have proved more influential, if not always beneficially so. The concept of a specially written series (or suite) of shortish pieces, interlinked either musically or merely by circumstance, has inspired many of those looking for a way of lending spurious dignity to their normal output. Similarly, the idea of featuring just one soloist per piece which Duke inaugurated with four “concertos” in 1936 (and came to rely on increasingly thereafter), found immediate favour with several other big bands in the swing era. Less far-reaching was the effect of his longer compositions, starting as far back as the two quite different versions of “Creole Rhapsody” in 1931; Ellington’s own successful follow-ups included “Reminiscing In Tempo” (1935), “Diminuendo And Crescendo In Blue” (1937), “Black, Brown And Beige” (1943) and “Tone Parallel To Harlem” (1951). The retention of a jazz feel despite a minimum of improvisation in these larger structures seems to have eluded other writers.

The crucial factor in Ellington’s evolution was his enormous receptivity to everything he ever heard (and saw and felt, hence his choice of evocative titles); as a result, while there was a consistent, and no doubt fairly egotistical, emotional core, his sources of inspiration were constantly expanding. Just as an improviser has to learn to think while on his feet, so Duke learned how to write his kind of jazz while doing it. Indeed, perhaps the writing process is more easily understood by comparing it with his own solo work on piano, and by contrasting the brief and rather bland pseudo-ragtime contributions on his earliest recordings with the dynamic and totally original playing on two albums thrown together in a few hours with Charles Mingus – Max Roach and with John Coltrane – Elvin Jones. It may well be that the small school of pianists who have learned from Duke’s use of the instrument – Theolonious Monk, Randy Weston, Abdullah Ibrahim, Stan Tracey, Cecil Taylor and a few others – have perpetuated the spirit of Ellington more meaningfully than those who try to copy his composition and orchestration.

One of the problems in considering Ellington’s achievement is that it exists on an astonishing variety of levels. Not only do the writing and playing offer a convenient contrast -for each extended work there are several straight ahead ballads, simple in conception but immensely sophisticated in their execution. And the number of different uses Duke found for the twelve-bar blues is bewildering to behold.

Then there is his success as a songwriter (which subsidized the continued existence of the Ellington band in its last 25 years of so): some of the few titles mentioned above had lyrics added and became twice as popular, as did numerous other standards; the quality and quantity of his song output places Duke in the Gershwin and Porter category. However, his uniqueness lies not only in the breath and universality of the music which reached the greatest number of listeners, but in those irreplaceable and inimitable icons such as “Harlem Air Shaft”, “Concerto For Cootie” and “Ko-Ko”, all recorded within a few months in 1940, which have been an inspiration to several generations of jazz musicians.

A Brief History of The Toronto Duke Ellington Society:

The Toronto Duke Ellington Society was founded on May 4th 1959. Bill Ross, a Canadian working in Hollywood at the time, placed a notice in Downbeat magazine in late 1958 announcing that a Duke Ellington Jazz Society had been formed in Hollywood.

Rhea Anger, a champion of the music of Ellington, in response to a letter of January 29, 1959 from Bill Ross, organized the first meeting of the Toronto Chapter, which was held on May 4th, 1959 at the Maison d’Or restaurant with 18 people in attendance.  Anger was elected as the first president, and the Toronto Chapter has been meeting regularly ever since.  Rhea Anger was the widow of Justice Harry Anger of the Ontario Supreme Court who had established a warm friendship with the Duke many years before. After his death Rhea and her son, Ron, also a lawyer, maintained the relationship.

Duke Ellington played in Toronto many times between 1931 and 1973 at various locations including the Canadian National Exhibition, The Mutual Street Arena, The Royal York Hotel, Maple Leaf Gardens, Massey Hall, The O’Keefe Centre and the Colonial Tavern.  Ellington also performed many times in other Canadian locations notably Winnipeg MB on November 6 1938, the day before the famous Fargo, ND dance date and he performed at Stratford Shakespearean Festival five times – 1956, 1957, 1963, 1966, and 1968.

There are reports that further chapters of the Duke Ellington Society were formed in Chicago (1993) and Pittsburgh.  These societies are now discontinued.